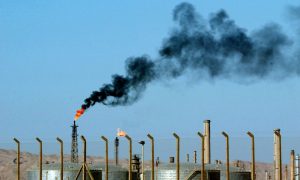 DURBAN—An explosion rocked South Africa’s second-largest crude oil refinery in Durban on Friday injuring seven people, local emergency services said. Engen, which operates the plant and is majority owned by Malaysia’s Petronas, said a fire broke out at around 0510 GMT and was extinguished by 0645 GMT. “I saw a massive fireball at the centre of the refinery with thick black smoke billowing from it. A few minutes later many vehicles passed by my home,” Durban resident Shane Lloyd Pretorius told Reuters. The extent of damage or the impact on production at the 120,000 barrels per day (bpd) refinery was not clear. Those injured are in a stable condition, KwaZulu-Natal emergency medical services spokesman Robert McKenzie said. Engen said in a statement that the cause of the fire was under investigation. It made no mention of injuries or output and said it would provide another update later. A Reuters witness …Africa News | The Epoch TimesRead MoreAfrica, World, Durban, oil refinery