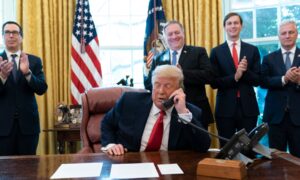 CAIRO—The U.S. Embassy in Khartoum said Dec. 14 that President Donald Trump’s administration has removed Sudan from the U.S. list of state sponsors of terrorism, a move that could help the African country get international loans to revive its battered economy and end its pariah status. According to a Facebook post by the embassy, Sudan’s removal was effective as of Dec. 14. A notification to that effect, signed by U.S. Secretary of State Mike Pompeo, would be published in the Federal Register, it said, adding that the 45-day congressional notification period has lapsed. “This achievement comes with numerous opportunities for Sudan’s development,” Sudanese Prime Minister Abdalla Hamdok wrote on Twitter, adding that his country “officially” rejoined the international community as a “peaceful nation supporting global stability” after nearly three decades of isolation. Pompeo said in a statement that the removal came after Sudan’s transitional government met “the statutory and policy …Africa News | The Epoch TimesRead MoreAfrica, Politics, Trump Administration, US, World, Sudan, Secretary of State Mike Pompeo, President Donald Trump