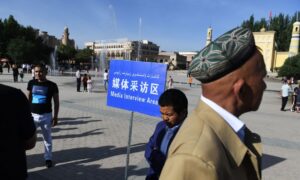 Foreign Correspondents’ Clubs (FCCs) in seven Asian regions issued a joint statement on Dec. 15, expressing concerns over the detention of a Chinese journalist working for Bloomberg News. Fan Haze, a Chinese citizen, was taken from her home in Beijing by plainclothes officers of the local state security bureau on Dec. 7, allegedly on suspicion of endangering national security. She worked for numerous foreign media, including Reuters and Al Jazeera, before she started working for Bloomberg in 2017. “The FCCs stand by the Foreign Correspondents’ Club of China in its efforts to seek an explanation on why the Chinese authorities detained Fan,” stated the seven FCCs of Japan, Hong Kong, Jakarta, the Philippines, South Asia, Taiwan, and Thailand. The FCCs added: “Chinese nationals perform invaluable roles in support of foreign media in China. Without their work, it would be difficult for foreign media to operate in China, and their safety …Read MoreNews and stories on China-US relations | The Epoch TimesChina, China Human Rights, China-US News, Bloomberg News, Foreign Correspondents Club of China, FCC, Jimmy Lai, Xinjiang