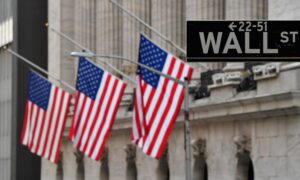 WASHINGTON—In his final weeks in office, President Donald Trump and his Cabinet members took swift actions to ban investments in large Chinese companies, a major step in curbing Beijing’s access to lucrative U.S. capital markets. The administration has banned investing in 44 companies identified by the U.S. Department of Defense as “Communist Chinese military companies.” U.S. investors will have to divest from the securities of these companies and their subsidiaries before the November deadline. The Pentagon’s blacklist drew Wall Street’s attention when Trump issued an executive order after the election in November 2020 that prohibited investing in companies with ties to the People’s Liberation Army. The order initially covered 31 Chinese companies, including prominent technology and manufacturing firms, such as state-run mobile operators China Mobile and China Telecom, video surveillance manufacturer Hikvision, and aerospace firm Aviation Industry Corp. of China. Many of these companies are publicly traded on stock exchanges around the world. Through public pension and …Read MoreEpoch Times, United States politics | The Epoch Times