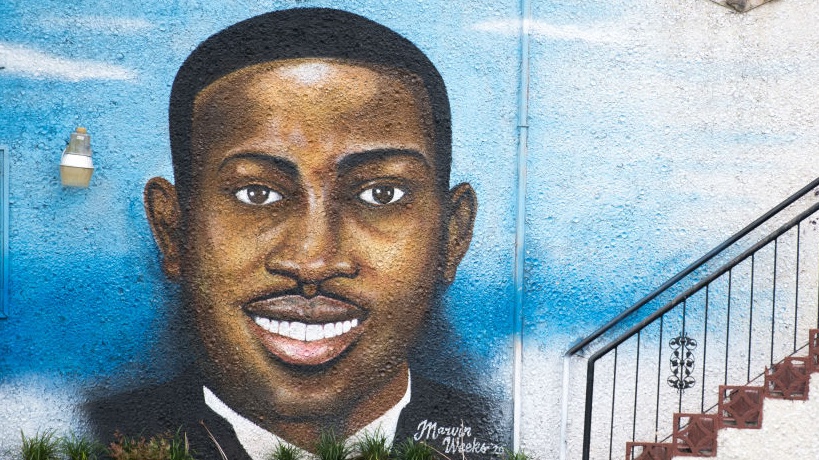 Wanda Cooper, Ahmaud Arbery‘s mother, has filed a federal lawsuit against the men accused of killing her son as well as the police department officials who allegedly covered it up.

The lawsuit said Gregory McMichael and his son, Travis McMichael had effectively been deputized by the Glynn County Police Department and after the shooting got inside help from Brunswick County District Attorney Jackie Johnson and Ware County prosecutor George Barnhill.

Gregory previously worked for the police department and the prosecutor’s office as an investigator, where he developed close personal relationships with both Johnson and Barnhill.

“For nearly three months, Glynn County police officers, the chief of police, and two prosecutors conspired to hide the circumstances surrounding Ahmaud’s death and to protect the men who murdered him,” the lawsuit said.

“And none of this would have been discovered if not for video footage leaked to the media, which showed the horrific and brutal murder of Ahmaud,” the lawsuit stated.

The suit culminates a series of revelations that came to light over the last year regarding what happened the day Arbery was killed.

After Gregory, Travis and William Bryan allegedly cornered and shot Arbery to death, they were not arrested, and Johnson and Barnhill each took steps to shield everyone involved from arrest, according to the Washington Post and New York Times.

“Having previously authorized retired Officer Gregory McMichael to stand in as law enforcement and respond to recent neighborhood trespasses ‘day or night,’ the department declined to meaningfully investigate the circumstances surrounding Ahmaud’s murder,” the lawsuit said.

“The effort to cover up what the McMichaels and Bryan had done continued in the Brunswick County District Attorney’s office. Defendants DA Jackie Johnson had known Gregory McMichael personally for years when he served as her investigator, and had previously intervened to try to keep him on the police force after he repeatedly failed to complete state-mandated officer training,” it added.

The 47-page lawsuit said Johnson told officers not to arrest either of the McMichaels before recusing herself and handing the case off to another nearby prosecutor, Barnhill, who also had a close relationship with Gregory.

Once that fact was revealed, Barnhill, like Johnson was forced to recuse himself, but not before “issuing a letter intended to justify the murder of Ahmaud as ‘perfectly legal,’ based on a multitude of demonstrably false statements,” according to the lawsuit.

“This included painting Ahmaud as a violent and unstable criminal who had attacked the McMichaels,” it said.

Both of the McMichaels are now facing murder and aggravated assault, while Bryan was hit with felony murder and criminal attempt to commit false imprisonment charges, according to ABC News.

In an interview with the outlet, Cooper said that it has been a struggle since Arbery’s death and that she wanted him to be remembered for more than how his life ended.

“Ahmad was loved, and not only was he loved, Ahmaud allowed himself to love. Ahmaud was a brother. He was an uncle, he was a grandson. He was a nephew. Ahmaud was more than just a jogger who decided to jog on that Sunday afternoon. Ahmaud was loved by many,” she said.

The suit was filed in Southern District of Georgia and features 12 counts, including excessive force and unlawful seizure; failure to intervene; conspiracy to violate Fourth Amendment rights; conspiracy to interfere with civil rights; failure to prevent harm; state-created danger; substantive due process; failure to supervise; discipline and train; denial of access to courts; conspiracy to obstruct justice; wrongful death/survival action; conspiracy/battery; willful and wanton misconduct; and libel, according to local news outlet News4.

Cooper is seeking $1 million in damages.