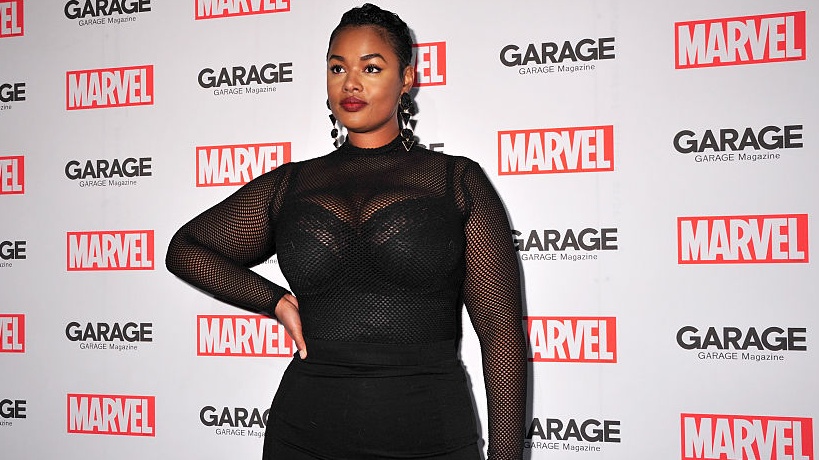 Precious Lee, a Black fashion icon from Atlanta, sat down with Good Morning America to reflect on her historic achievement as one of the first plus-sized models on the Versace runway. The trailblazer, who was one of three plus-sized models to make history at the runway show in Italy last year, said she was overcome with emotion before her interview last week.

“I’ve always imagined myself on that runway,” Lee said. “I’ve always adored Versace. I grew up in a Versace home. We always loved Versace as a family.”

When she took the stage in Milan, Italy, the 31-year-old was thinking of her sister, who was also a model, according to Allure.

“The show was the day before her birthday,” Lee said. “Anytime I have a really big moment or just when I’m feeling the need for the energy of my sister — I felt her right before I was about to go out.”

As she relied on the energy of her sister while waiting for her turn to walk, Lee heard another comforting voice.

“I’m so focused and all of a sudden I was about to cry and then someone back stage was like ‘you’re the most beautiful woman in the world. Go!'” the Georgia native said. “I turned the corner and I zoned out and I started to float.”

In the midst of the momentous occasion, Lee became more grateful for all the support she received during her journey.

“It was an acknowledgment of how supported I’ve been,” she said. “It was such a proud moment of arriving at an actual dream.”

Lee has also made history as the first Black curvy model to appear on American Vogue, according to her biography. Additionally, she’s appeared at New York Fashion Week for designers Christian Siriano, Tommy Hilfiger and Matthew Adams Nolan. Lee has also been featured in other magazines such as Glamour, Paper Magazine, V Magazine, Harper’s Bazaar, and M Le Monde.

Reflecting on the runway in Milan, Lee said she broke barriers in an industry which is not set up for people like her.

“It’s not set up for someone my size and my color and my background to be in this industry that has been so exclusive at that level,” she said. “It’s a lot to get through that. I’m so grateful that I was raised in a supportive home.”

Black Enterprise Tech Reports — How Rick Ross’ $5.8 Million ‘Coming to America’ Mansion Is Paying For Itself

Black Enterprise Tech Reports — How Rick Ross’ $5.8 Million ‘Coming to America’ Mansion Is Paying For Itself