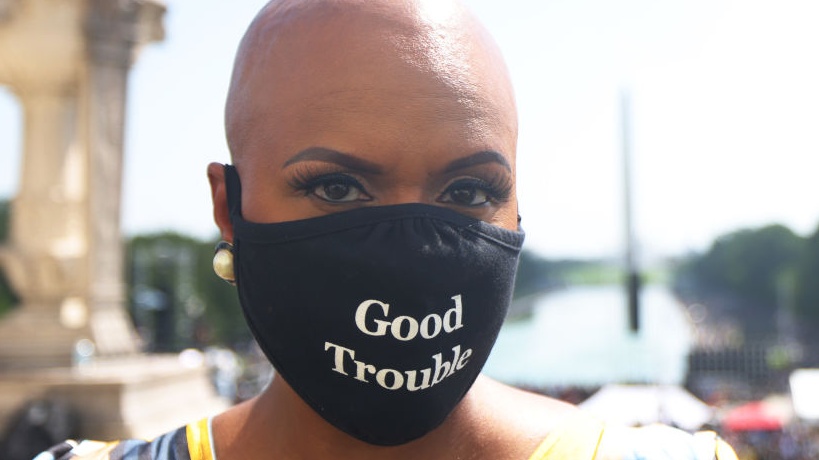 Rep. Ayanna Pressley (D-Mass.) is among a group of progressive politicians calling for President Joe Biden to cancel the crippling student loan debt affecting millions. She recently shared that she sympathizes with the plight of American students because she once borrowed and then defaulted on repayments.

In a virtual press conference hosted by the American Federation of Teachers, she said that the student debt crisis is a matter of racial and social justice, that if addressed, could help revitalize the economy and assist BIPOC communities in establishing pathways to generational wealth.

“Like 85 percent of Black students, I had to borrow; and like so many of those students, I also defaulted on those loans,” Pressley said during the press conference, according to Yahoo Finance. “We know that Black and brown students are five times more likely to default for those loans, than our white counterparts.”

Pressley later revealed that she was the first of her immediate family to attend a university. Growing up in a single-parent home, she said she had to prepare for college on the fly.

“There wasn’t anyone to hold my hand or a walk you through the college application process, or to fully explain what I was signing on to when I was signing all these documents,” Pressley said.

She shared last year the emotional trauma caused by incessant calls from debt collectors, while she worked to pay off the loans, Yahoo reported.

“A ringing phone was very triggering for me. Debt despair is real,” Pressley, who introduced The Monitoring and Curbing Abusive Debt Collection Practices Act in her governing state in 2019, said.

According to a 2018 report from the Brookings Institute, the research found that 38 percent of Black first-time college students in 2004 had defaulted on their loans within 12 years. In 20 years as many as 70 percent of Black borrowers “may ultimately experience default,” Judith Scott-Clayton, an educator and the author of the report, said.

“Decades of systemic racism and discriminatory policies like redlining and predatory lending… systematically denied Black and Latinx families the opportunity to build wealth,” Pressley said. “Forcing our families to take on greater rates of student debt, just for the chance at the same degree as our white counterparts, and contributing to the $1.7 trillion student debt crisis that is disproportionately borne by Black and brown communities.”

Pressley, Rep. Ilhan Omar and Stacey Abrams are using their platforms to challenge harmful narratives about the burden of student loans, Louise Seamster, an assistant professor at the University of Iowa, told Yahoo.

“We think of debt as an individual thing that’s shameful, it’s your individual burden,” she said. “And default is thought of as shameful… but this idea of default contributes to a false narrative.”

On Friday, a collaboration of attorney general urged Biden to use his powers to cancel up to $50,000 in federal student loan debt, CNBC reports.

A letter signed by a group of attorneys general from Illinois, Maryland, Minnesota, Delaware, Washington and other states, asked Biden to support Senate Resolution 46 and House Resolution 100 that would allow executive action to cancel up to $50,000 for each borrower.

“The burden of insurmountable student loan debt has crippled the finances of families across this country and widened the racial wealth gap,” Massachusetts Attorney General Maura Healey, who supervised the coalition, said in a statement.