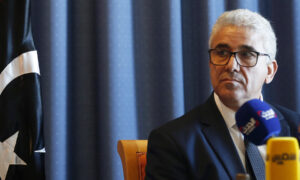 CAIRO—The interior minister of Libya’s U.N.-backed government survived an ambush by gunmen on his motorcade on Feb. 21, a brazen attack highlighting the towering challenges that remain for the newly appointed government that is trying to unite the country before elections late this year. Armed men opened fire at Fathi Bashagha’s motorcade on a highway in Tripoli, wounding at least one of his guards, said Amin al-Hashmi, a spokesman for the Tripoli-based Health Ministry. He said the minister survived the attack and his guards chased the assailants, killing one and detaining two others. The Interior Ministry said in a statement that Bashagha was returning to his residence in the Janzour neighborhood when armed men in an armored vehicle opened fire on his convoy. The statement called the attack an “attempted assassination” of the minister. Earlier on Feb. 21, Bashagha met with Mustafa Sanalla, head of Libya’s National Oil Corp. to …Africa News | The Epoch TimesRead MoreAfrica, World, Libya