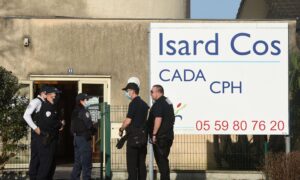 PARIS—A Sudanese asylum seeker stabbed and killed an employee at a migrant center in the southern French city of Pau on Friday after his request for political asylum was rejected, authorities said. The killer had no terrorist motives, the Pau prosecutor said on Saturday. Prosecutor Cecile Gensac said that the assailant was not on a national list of terrorism suspects. Following Friday’s attack he was detained by staff at the asylum center. “Two employees of the center intervened, with a lot of courage. They held him by the arms and locked him in an office. He put up no resistance,” she told a news conference. She said the 38-year-old assailant had arrived in France in 2015 and had spent some time at the immigration center. Following two convictions and jail time for acts of violence in 2017-2019, he had lost the right to apply for asylum and was set to …Africa News | The Epoch TimesRead MoreAfrica, Europe, World, France, migrants, asylum seeker, migration