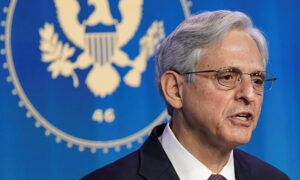 President Joe Biden’s nominee for U.S. attorney general, Merrick Garland, said during his Senate confirmation hearing Monday that he has not spoken with the president about the investigation into his son, Hunter Biden, but insisted that any Justice Department probes will be free of political interference. Sen. Chuck Grassley (R-Iowa) asked Garland if he’s talked to the President about any Hunter Biden investigations. “I have not,” Garland replied, adding that, “the President made abundantly clear in every public statement before and after my nomination that the decisions about investigations and prosecutions will be left to the Justice Department.” “That was the reason that I was willing to take on this job,” Garland said. “So the answer to your question is no.” Hunter Biden’s tax affairs are currently the subject of a federal probe. “I learned yesterday for the first time that the U.S. Attorney’s Office in Delaware advised my legal …Read MoreEpoch Times, United States politics | The Epoch Times