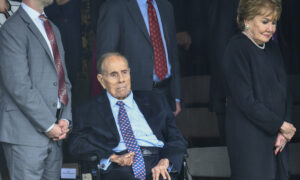 Bob Dole, former Republican presidential candidate and longtime senator, has been diagnosed with lung cancer. “Recently, I was diagnosed with stage four lung cancer,” Dole said in a statement released Thursday. “My first treatment will begin on Monday. While I certainly have some hurdles ahead, I also know that I join millions of Americans who face significant health challenges of their own.” Dole, 97, served for decades in Congress, starting with the House of Representatives in 1961. He began representing Kansas in the Senate in the late ’60s, and eventually became Republican leader. Dole left the Senate to challenge President Bill Clinton, but lost to Clinton in the 1996 presidential election. Dole has also launched Republican bids twice prior, but was defeated in the primaries by Ronald Reagan and George H.W. Bush, respectively. Dole went on to become a lobbyist and chairman of the World War II Memorial Campaign, among …Read MoreEpoch Times, United States politics | The Epoch Times