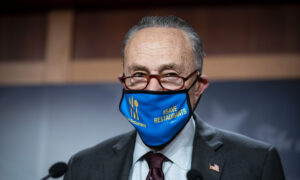 Senate Majority Leader Chuck Schumer (D-N.Y.) said on Tuesday he has directed lawmakers to draft a package of measures investing in cutting-edge technologies to “out-compete” China. The announcement comes as President Joe Biden has vowed to engage in “extreme” competition with the Chinese regime by boosting critical domestic sectors. Countering threats posed by Beijing also enjoys bipartisan support in Congress. Schumer said he has directed committees to work on a bill that would be based on bipartisan legislation he co-sponsored last year that sought to inject $100 billion in funding for research in key high-tech areas. “I want this bill to address America’s short-term and long-term plans to protect the semiconductor supply chain, and to keep us number one in things like AI, 5G, quantum computing, biomedical research, [data] storage,” the senator said at a weekly press conference, adding that he was aiming for the measure to be introduced in the …Read MoreEpoch Times, United States politics | The Epoch Times