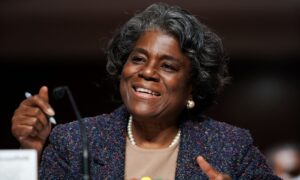 WASHINGTON—The U.S. Senate on Tuesday confirmed President Joe Biden’s nominee, veteran diplomat Linda Thomas-Greenfield, to serve as U.S. ambassador to the United Nations, adding a key member to his national security team nearly a month after her confirmation hearing. The 100-member Senate backed Thomas-Greenfield by 78 to 20 to be Washington’s representative at the world body and a member of Biden’s Cabinet, comfortably exceeding the simple majority needed. All of the no votes came from Republicans. Thomas-Greenfield, 68, is a 35-year veteran of the Foreign Service who has served on four continents, most notably in Africa. Republicans who opposed her nomination focused on a 2019 speech she gave that some said was favorable to Beijing. Thomas-Greenfield and her supporters pushed back, citing her decades as a diplomat seeking to increase U.S. influence and counteract China’s. At her confirmation hearing in late January, she stressed the importance of U.S. re-engagement with …Read MoreEpoch Times, United States politics | The Epoch Times