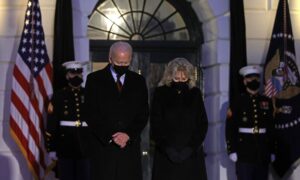 President Joe Biden on Monday evening participated in a moment of silence at the White House to honor the 500,000 American lives lost to the CCP (Chinese Communist Party) virus. The United States surpassed half a million CCP virus-related deaths on Monday, according to government data collated by Johns Hopkins University—in a grim milestone that marks almost a year since the outbreak first reached the United States. “Today we mark a truly heartbreaking milestone: 500,071 dead,” Biden said in an address to the nation. ”That’s more Americans who’ve died in one year in this pandemic than in World War I, World War II, and the Vietnam War combined. That’s more lives lost to this virus than any other nation on Earth.” Joined by First Lady Jill Biden, Vice President Kamala Harris, and Second Gentleman Doug Emhoff, the president in his address encouraged Americans to remember the lives of those lost …Read MoreEpoch Times, United States politics | The Epoch Times