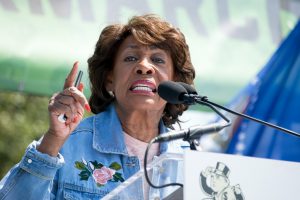 Rep. Maxine Waters (D-Calif.) wants to help the 70 million Americans that have trouble re-entering the workforce after being incarcerated.

Waters and Rep. David Trone (D-Md.) introduced the Workforce Justice Act late Wednesday. The bill would remove the question of whether an applicant has served time for a crime from job applications. According to Yahoo News, the bill would also incentivize states to encourage public and private companies to cut the question from applications by tying it to critical criminal justice funds from the federal government.

“Right now, far too many justice-impacted individuals, primarily people of color, aren’t being given a fair shot at employment because of their criminal history,” Trone said in a release. “When my company banned the box and hired 500 returning citizens, we saw a higher retention rate and more dependable employees. Banning the box isn’t just good for business, it’s just the right thing to do and brings us one step closer to a more just society.”

According to the release, 36 states, Washington D.C., and more than 150 cities and counties have taken the question off job applications. Much of that credit goes to the late Rep. Elijah Cummings‘ (D-Md.) who introduced the Fair Chance Act, which was passed in 2018. Fourteen states have since canceled the question on private employment applications.

Waters and Trone want to help men and women who leave the system. For many, that first release is the beginning of a recurring cycle. Many end up back inside due to a lack of opportunities once released.

Healthy People, a government site providing measurable public health objectives in 10-year intervals, said the U.S. releases more than 7 million people from jail and another 600,000 from prison each year. Within three years of their release, 66% are rearrested and 50% are incarcerated again. For Black American men, that rate is 87%.

Gwendale Boyd-Willis told Black Enterprise of her struggles after serving just four months. After her release, Boyd-Willis went to college and earned her bachelor’s degree. However, it still wasn’t enough. Even after she obtained a second degree, she still had to go through hoops to prove that that life was behind her.

Waters believes anyone who was incarcerated and wants to change their lives should be given the opportunity to do so.

“For previously incarcerated men and women who are doing their part to reintegrate into society, the job application process is often stressful and debilitating due to the rate at which they are denied consideration for employment because of the fact that they have served time,” Waters said in a statement. “This legislation to ban the box would take critical steps forward to ensure that the over 70 million Americans who have an arrest or conviction record are not left behind. By prohibiting private employers from asking about the criminal history of a job applicant prior to the extension of a conditional offer of employment, like my state of California has already done, job applicants with a criminal history will be evaluated based on their qualifications alone and have a fair shot at rebuilding and reclaiming their lives.”