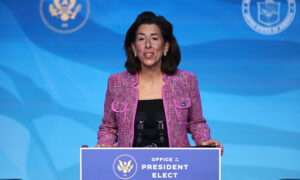 President Joe Biden’s pick for Commerce secretary, Gina Raimondo, on Thursday acknowledged that the tariffs on China imposed by former President Donald Trump have been “effective,” in comments that signal the current administration won’t soon roll back the highly contentious duties. “The data show that those tariffs have been effective,” Raimondo, who was confirmed to her Cabinet role on Tuesday, told MSNBC. “What President Biden has said is there will be a whole-of-government review of all of these policies and decide what it makes sense to maintain.” Trump imposed tariffs on billions of Chinese products in an effort to confront the Chinese Communist Party’s unfair trade practices, including its massive government subsidies to Chinese companies. His administration also placed tariffs on $360 billion worth of Chinese goods, including imported steel and aluminium, in response to the regime’s expansive state-sanctioned campaign to steal U.S. intellectual property (IP). It also entered into trade …Read MoreNews and stories on China-US relations | The Epoch TimesChina, China-US News, Executive Branch, Politics, US, Joe Biden, Gina Raimondo