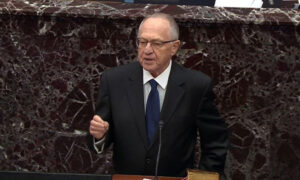 Harvard Law professor emeritus said that cancel culture needs to be fought by all Americans, after a House subcommittee last week held a hearing to discuss disinformation and extremism in the media. Dershowitz, who notably defended former President Donald Trump during his first impeachment trial last year, said that Americans who subscribe to all political viewpoints—including liberals—should be pushing back. The House subcommittee specifically aimed at cable and satellite carriers that give a voice to conservative-leaning networks. “I hope all Americans wake up to this,” Dershowitz told Newsmax on Thursday. “I hope it’s not just the ‘shoe is on the other foot’ test. Now, the conservatives are the victims of cancel culture so they’re big supporters of the Constitution and constitutional rights. During McCarthyism, it was the left that were the victims, and the right were the oppressors.” Going further, he stated that “we need both the right, the left, and …Read MoreEpoch Times, United States politics | The Epoch Times