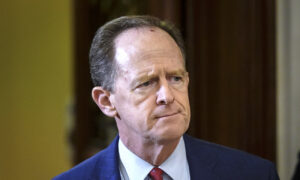 The Pennsylvania Republican Party voted to rebuke Sen. Pat Toomey (R-Pa.) for his vote to convict former President Donald Trump. A rebuke is a political function and does not have any power. “We are outraged that Senator Toomey took part in an impeachment process that facilitated Democrats’ tireless obsession with partisan political retribution,” read a statement sent by the Pennsylvania Republican Party. “Democrats used impeachment as a political weapon, which set a dangerous precedent in America, and Senator Toomey did not stand in their way,” their statement added. “We oppose the Senator’s actions in the strongest terms, but we have faith that the voters will properly address public officials who do not satisfactorily represent the best interests of this nation.” The vote count was 128–124, with 13 abstaining, to approve a statement expressing their displeasure with the senator. Toomey was censured by the York County GOP last month. The Pennsylvania …Read MoreEpoch Times, United States politics | The Epoch Times