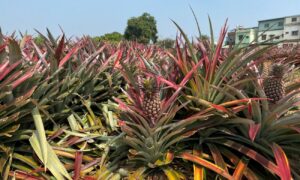 TAIPEI—The de facto U.S. and Canadian embassies in Taiwan on Tuesday praised the quality of pineapples grown on the island, depicting photographs of their top diplomats in Taipei with the fruit after an import ban by China. China last week stopped the import of Taiwanese pineapples, citing “harmful creatures” it said could come with the fruit. Infuriated Taiwanese authorities called the ban a political move to further pressure the island, a charge that China denied. While neither the United States nor Canada, like most countries, have formal diplomatic ties with the Chinese-claimed island, both have their own disputes with Beijing over human rights, trade, and other issues. While Taiwan is best known internationally for its thriving tech companies, the sub-tropical island has a flourishing fruit industry. Last year, more than 90 percent of its exported pineapples went to China. Referencing a tweet by Taiwan Foreign Minister Joseph Wu for people …Read MoreEpoch Times, United States politics | The Epoch Times