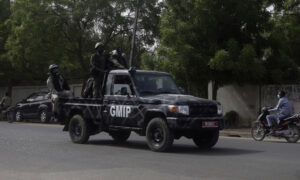 N’DJAMENA, Chad—Rebels seeking to overthrow Chad’s new transitional government claimed Thursday to have shot down a military helicopter, while the junta in power warned political opponents not to renew protests after violent demonstrations earlier in the week left at least six people dead. The Chadian government has said that the rebels blamed for killing President Idriss Deby Itno last week have retreated across the border to neighboring Niger. However, in a statement released Thursday, the rebel group claimed it controls the Chadian town of Nokou, located more than 300 kilometers (186 miles) north of the capital. It was not immediately possible to independently verify the claims made by the armed group known as the National Front for Change and Concord in Chad. Its fighters have threatened to attack the capital, N’Djamena, in a bid to overthrow the new government now led by Mahamat Idriss Deby, son of the slain president. …Africa News | The Epoch TimesRead MoreAfrica, International, World, Chadian Rebels, military helicopter