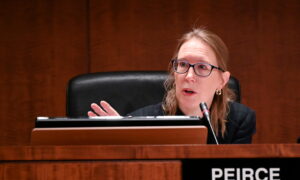 LONDON—China’s planned digital yuan will not dethrone the dollar, a top Securities and Exchange Commission official said on Thursday, citing the growth of so-called stablecoins backed by the greenback. The world’s biggest central banks, including the People’s Bank of China and U.S. Federal Reserve, are stepping up work on issuing digital cash, eyeing improvements to payment systems and looking to pre-empt the rise of cryptocurrencies. The PBOC’s work on a digital yuan—part of a push to internationalize the currency—is far ahead of similar initiatives in other major economies. That has led some analysts to question if the faster pace from the globe’s second largest economy could lead the yuan to gain dominance over the dollar, which remains the world’s dominant reserve currency. Yet Hester Peirce, a Republican commissioner at the SEC, said the rise of stablecoins—privately issued cryptocurrencies often backed by the dollar—would maintain the U.S. currency’s status. “Even in …Read MoreNews and stories on China-US relations | The Epoch TimesBusiness, China, China Business & Economy, China-US News, Economies, Economy, US, US News, digital, yuan, Dollar, SEC, official