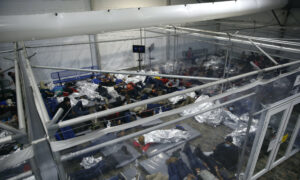 Top Senate Democrats have rebuffed a GOP request to hold an ad hoc public hearing on the border crisis and to question Department of Homeland Security (DHS) leadership, saying that the annual DHS oversight hearing that will be scheduled “in due course” will provide an opportunity for Republicans to question administration officials about the situation along the U.S.-Mexico border. In a sharply worded April 9 letter, Senate Judiciary Committee Chairman Dick Durbin (D-Ill.) and Senate Immigration Subcommittee Chairman Alex Padilla (D-Calif.) wrote that when Republicans chaired the committee and subcommittee during President Donald Trump’s tenure, Democrats requests for hearings and oversight action on Trump’s border policies faced pushback. “Over the last four years, the Committee ignored the worst abuses of President Trump’s Administration, including the cruel separation of thousands of children from their parents at the border, a travel ban targeting mostly Muslim-majority countries, and the attempted termination of deportation protections …Read MoreEpoch Times, United States politics | The Epoch Times