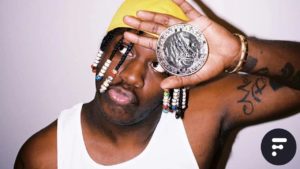 Rapper Lil Yachty is known for his standout style that includes colorful braids and nails. Now the hitmaker is sharing his love for decorated nails with the world by releasing his own nail polish line.

The Indiana native announced his new beauty business venture on social media. “I’d like to introduce my new nail paint line @crete__co …. FIRST COLOR DROP MAY 21. 4 ALL GENDERS. FOR YOU, NOT THEM!,” he captioned a photo slide of him promoting his new products.

Among the supporters in the comments included actress Yara Shahidi, rapper ASAP Ferg, and singer Justine Skye. It was just last year when the “Oprah’s Bank Account” emcee made media headlines after he defended a 17-year-old boy who was suspended from his West Texas high school for wearing nail polish, Revolt TV reports.

“If someone wants to express themself in any type of way, as long as it’s not harming anyone or bringing anyone down, they should be allowed to do so. … You shouldn’t be punished or tormented for being you,” Yachty told TMZ.

He also teased his nail polish that was on the way.

“I’ve been in development working on my own nail paint,” Yachty revealed. “It’s called Cree.” He continued. “It’s essentially like, it’s unisex, but I want it to be more focused on for men to use it, and to be more comfortable in their own skin,” the “Lil Boat” rapper said. “Because bro, it’s 2020, you know what I’m saying? Like it’s about to be 2021 — come on, what are barriers? We still have barriers?”

Yachty has proudly boasted his manicures and pedicures on social media. A designer by the Twitter name @SplashyStacks has been credited for the rapper’s unique nail designs, XXL reports. It looks like Yachty is only elevating his eccentric style and teaching others how to do the same.
RELATED COTENT: Wu-Tang Launches Lipstick Line And Announces Nov. 9 is ‘Wu-Tang Clan Day’