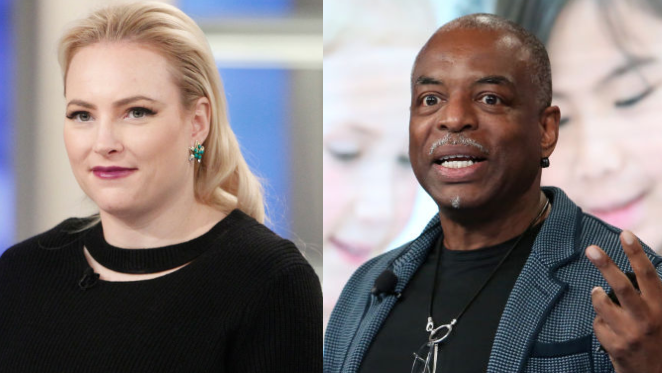 On Monday’s episode of The View, McCain mentioned that Dr. Seuss Enterprises made the decision in March to halt publishing six children’s books due to racist and insensitive imagery.

“What do you think of that decision and about the cancel culture surrounding works of art or artists that are controversial?” she asked.

The actor broke down why he thinks the term “cancel culture” is used inappropriately, and that there are “good signs” that the culture is moving forward.

“I think it’s misnamed,” Burton said in regards to the term. “That’s a misnomer. I think we have a consequence culture, and that consequences are finally encompassing everybody in this society, whereas they haven’t been ever in this country.”

Burton revealed that he recently gave his talents as a voiceover for a Seuss Foundation video reminding audiences that “Dr. Seuss is more than simply a company that’s decided to put a couple of books on the shelf, to take them out of rotation.”

He added that the Dr. Seuss brand has provided “wonderful, creative” children’s content for generations.

“That man, Theodore Geisel, is responsible for generations of wholesome, healthy, wonderful, creative content for children of all ages. So, I think we need to put things in perspective,” Burton said.

Burton, 64, has shown no fear in using his platform to educate and inform people when necessary. In November, the iconic actor set TV Olbermann straight for comparing former President Donald Trump to a whiny version of Burton’s famed Roots character Kunte Kinte, as Blavity previously reported.

“Yes, Donald Trump has always been, will always be, and on the day of his bid for re-election, still is: a whiny little Kunta Kinte,” Olbermann wrote in a now-deleted tweet.

In response, Burton wrote to Olbermann, “Dear @KeithOlbermann, #Kunta is pronounced with a long “u” as in unity, not a short “u” as in cup. Try again!”

Following public outcry, Olberman issued an apology that was as strange as his Trump comparison.

“Just logged back in: I apologize for my previous subtweet of this. I was using an old 70’s-80’s technique for calling somebody a c**t without writing/saying c**t, just using a sound-alike to call Trump a c**t. Deleting previous, largely because this one clarifies the c**t part,” he wrote.

Last month, fans of the former Star Trek actor expressed how excited they are to see Burton star as a guest host on the latest season of Jeopardy. The 64-year-old will join a group of guest hosts that include TV news anchors Robin Roberts, George Stephanopoulos, journalist David Faber and sports analyst Joe Buck, as Blavity previously reported.

After a petition was created online to see Burton replace host Alex Trebek, the Roots actor said he was grateful to be held in such high regard by fans, and took time to honor the beloved former show host.

“Of course while I’m very flattered by the petition, my thoughts are definitely with Alex Trebek’s family and his millions of fans and the devastating loss of this irreplaceable legend. #LongLiveAlex,” Burton tweeted.